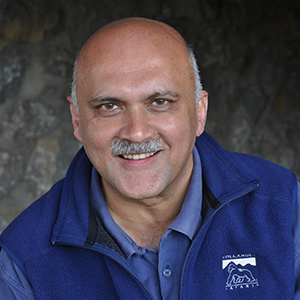 Praveen Moman grew up in the wilds of Uganda, where his family was part of the pioneering Asian community that was central to opening up East Africa. He then moved to the U.K. as his family became refugees under the Amin expulsion. This was followed by a career as a political and policy adviser in the European Union and British Government, including working for Lord Cockfield, Vice President of the European Commission, Lord Heseltine, former U.K. Deputy Prime Minister and Lord Renton, Minister for the Arts and Lord Newton, Leader of the House of Commons.

Praveen founded Volcanoes Safaris in 1997, which has been at the forefront of reviving tourism in Uganda and Rwanda. Under Praveen’s guiding vision, Volcanoes has designed and built four unique lodges near the great ape parks – Virunga, Mount Gahinga, Bwindi and Kyambura Gorge. The luxury lodges are sensitive to local culture and aesthetics, the post-conflict context and the need to use resources responsibly. Local people have been trained and empowered to run and manage them.

In 2000, Volcanoes Safaris became the first international safari company to take clients to Rwanda and in 2004 built the now renowned Virunga Lodge. It helped kick-start gorilla tourism after the genocide through the Volcanoes BLCF Partnership Project. In 2005 the company become a signatory to the UN Kinshasa Declaration on Saving the Great Apes, the only safari company to do so. Then, in 2009, Praveen established the Volcanoes Safaris Partnership Trust (VSPT), a non-profit organisation that aims to create long-term, self-sustaining projects that enrich the livelihoods of local communities and promote the conservation of the great apes.

Today the company is recognized for the unique great ape ecotourism model it has created. In recognition of this work, Volcanoes Safaris received both the Travel + Leisure Global Vision (2012) and Condé Nast Traveler World Savers (2013) awards. Also in 2013, Praveen was appointed as an Adviser to the Congo Basin Forest Partnership, which promotes sensitive economic development of the forests of Central Africa. Praveen has been described as a ‘visionary conservationist’ by the Financial Times and as ‘one of top twenty-five conservation-philanthropists’ in Africa by Departures Magazine.  In 2014, Into the Virungas, a conversation with Praveen about his essential vision to champion the people, the animals and forests of Africa was published.

Praveen was educated in Uganda and at London and Cambridge University in the UK. He has been involved in Seva Mandir, a respected Indian charity and is currently a Vice-Patron. Since 2012 he has been a trustee of the Imbabazi Foundation in Rwanda, which supports genocide survivors; he is a former VSO volunteer in Jamaica; and a Robert Schuman Scholar of the European Parliament. He has been on the Advisory Board of the Adventure Travel Trade Association in the USA since 2009; since 2014 he is on the Board of the Edward Heath Centenary Trust; and on the Board of the Eastern Africa Association. He is married and has one son and lives in London, Uganda and Rwanda.